Being an ‘Analyst’ is So Passé

Did you see our Data Analyst Looking for Work… post? The one with the ‘sexiest job of the century’ caption on the image? We wanted to revisit this to let you know an even sexier career is emerging. While analysts are still around and in high demand, we are seeing the evolution of a new breed of data Jedi. The data scientist. 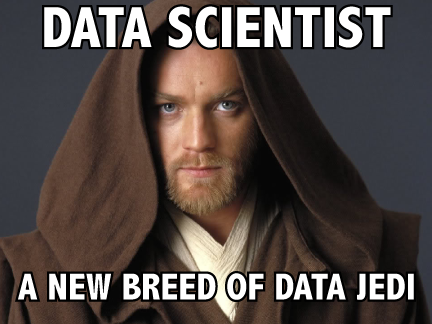 What is the difference you ask?

There are overlaps between a data analyst and a data scientist, but think of an analyst as someone skilled at manipulating data on one system and presenting visualization of that data as required. According to IBM, “a data scientist will most likely explore and examine data from multiple disparate sources. The data scientist will sift through all incoming data with the goal of discovering a previously hidden insight, which in turn can provide a competitive advantage or address a pressing business problem. A data scientist does not simply collect and report on data, but also looks at it from many angles, determines what it means, then recommends ways to apply the data.” IBM also notes, “strong business acumen, coupled with the ability to communicate findings to both business and IT leaders in a way that can influence how an organization approaches a business challenge.”

While I would not say a data scientist practices science in the same way a research chemist may, there are some similarities in the way one approaches a problem and finds a solution. Think back to grade school – all the way back to the scientific method. Wikipedia defines the scientific method as ‘the process through which science is carried out’. That doesn’t sound very profound but truly, if you have a nagging question the steps you would undertake to find the answer are right there. By adulthood it is nearly engrained in us to follow this process (some more formally than others) and often we do it without realizing it.

I am pretty sure that #2 was added since I was in fifth grade, by the way. That one is new.

We all approach questions in this manner every day. In addition to an advanced skill set beyond that of a data analyst, a data scientist will possess a curiosity about organizational data and be able to spot anomalies or trends that may lend themselves to business decisions. Part analyst and part business advisor, you might say.

What do you need to know to be a data scientist?

The emergence of ‘data scientists’ has evolved alongside the buzzword ‘big data’. When you have that many data sets an analyst is no longer sufficient – apparently it takes a scientist to manage it and glean useful insights. You need someone who can digest that amount of information and make business recommendations. This Wall Street Journal article notes several ex-astrophysicists who are now data scientists. Well respected universities such as Harvard, Berkeley and Northwestern are now offering advanced degrees in data science.

Uh oh, and here it is, this article from the Harvard Business Review flat out calls it the sexiest job of the century. Last year, that was the data analyst.

Do you have someone on staff who can look at data across your channels, identify trends, answer questions and make business recommendations?

Want to take us for a spin?