Welcome to the party, Tina the Twitter Bot has arrived

A head-turner. She sashays into the room quietly, her turquoise attire catching your eye, a spring in her step. Her hairstyle exudes confidence and makes you remember days gone by. She has a lot to say – a lot – but keeps her conversations short – very short – and to the point. You feel the energy behind her, the power of what she can do. But who is she? 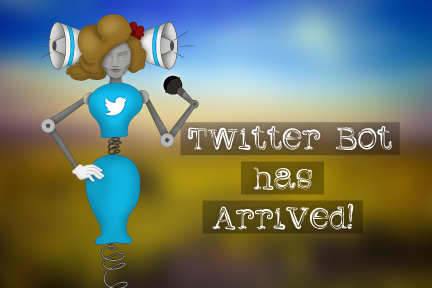 Tina brings a wealth of knowledge to the table. Moving beyond her persona, this Bot pulls and reports on one of your most active channels – Twitter. Your data is then presented side-by-side in Frakture with your Facebook data, your CRM data, and any other data you are looking to compare across channels so you can see where you are having the greatest impact.

Already get Twitter Analytics, do you? This is better…

Sure, you can see your impact in Twitter’s analytics platform. Truly, we present the same data. The value lies in how it is presented in Frakture and our ability to attribute revenue to your communications. In one place, you can see how the effort you are pushing out about your latest project is being picked up quickly on Twitter but moving slowly on Facebook. That same effort is doing very well via email marketing about but not bringing in revenue via social media. Rather than pulling that report in each platform (and more) and trying to tease out which messages delivered the results you are seeking, you can see it all in one place – Frakture.

How about a real-world scenario?

On July 23, 2014, a large environmental group launched a campaign encouraging the Minnesota Vikings to use bird-safe glass in the construction of their new stadium. There is a LOT of glass proposed in the new stadium and using bird-safe glass would spare many collisions and possible bird deaths. This campaign quickly started building momentum on Twitter and Facebook rolling in a petition and fundraising appeals.

With many goals in mind, how would you measure success and determine where to concentrate staff time, ad spend and promotion? In this case, the goals were increasing awareness, encouraging change in the building plans and fundraising to support their work, like the important research that revealed the hazards of the building design and a viable alternative. So every click, share, like, open and donation mattered.

In a normal scenario you would measure your performance by watching the numbers – what does the data say? To get those numbers you pull a Twitter Analytics Report, various Facebook Insights, Google Analytics, a revenue report from your CRM – then you either spend some considerable time looking at them spread out on your desk or merging them into a spreadsheet and trying to make sense of the different metrics and what they mean. Reading these many reports can be like reading runes or tarot cards – unless you have some special power, it just doesn’t make sense.

That is a day of staff time you could have used responding to campaign performance – adapting, optimizing your spending and maximizing your revenue.

While Twitter Bot arrived a little late to the Minnesota Vikings Bird Glass party, they were able to identify donations transacted on social media by analyzing and attributing revenue in Frakture. In addition, they were able to save considerable staff time in pulling reports that provided detail on impressions, interactions, actions, revenue and cost – across their multiple channels. For the remainder of the campaign they will be able to quickly discern effective tweets, posts and revenue streams and push advertising in a direction to achieve the desired outcome.

Thanks for getting the word out and we hope the Minnesota Vikings use bird-safe glass!

Focus on the forest not the trees

Or better yet – the entire ecosystem of your communications. Spend less time in the weeds pulling and compiling reports and more time taking relevant data and making timely decisions about how to move forward.

Frakture can get you there. We even throw in slick graphics to help you – and management – visualize the impact. Schedule your date with Tina and the other Bots today and request a demo!

Want to take us for a spin?